We receive a lot of questions about bedbugs, such as what is a bedbug, where do they come from, are they dangerous, etc.. We have posted the most popular questions and their corresponding answers below.

What is a bedbug?

A bedbug is a small nocturnal insect of the family Cimicidae that lives by hematophagy (or in other words by feeding on the blood of humans and other warm-blooded hosts). bedbugs can be found all over the world, generally in human inhabited environments. The reason bedbugs are normally found in these areas is because they feed off the blood of humans.

Bedbugs are small like an apple seed; an adult may grow to be the size of 4-7mm. They are a reddish-brown color, and their shape is flat and oval.

check out are bed bugs pictures to see them compared to all kinds of objects, such as a finger, dine, quarter, in the sink, etc.

Where do bedbugs come from?

One of the most common forms of infestation is through contacts with infested furniture in hotels, motels, and other places of temporary accommodation. Bedbugs can be passed on from used clothing or furniture. Cleanliness does not arrest the spread of infestation directly. The idea that dirt can cause an infestation is a misconception. However cleanliness, by depriving the bedbugs some of their hiding places, does slow down the infestation. Apartment complexes often have bedbugs because they can get from apartment to apartment easily.

What are their feeding habits?

When a bedbug bites a human, it injects two hollow tubes into the skin. With one tube the bedbug injects an anti-coagulant, anesthetic and with the other tube, it steals your blood. They will feed for about five minutes before returning to their hiding place. Also, bedbugs typically are active only at night (they start appearing at dusk) because they are nocturnal, but can be seen anytime especially if a chance to feed occurs. An important bit of information to know about the feeding habits of bedbugs is that they can survive for up to eighteen months without feeding even though they seek blood every five to ten days. A hungry bedbug looks slightly different from one that has fed because it is typically flat with a circular shaped abdomen while a blood fed bug is elongated with a tapered abdomen.

I’m not a doctor, but if a bed bug feeds on a person with HIV and you pop that bug in your hand which has a cut, I’d think there might be a concern! Check out my page on bed bug bites and you will see people attacked lives destroyed.

The bites themselves are not dangerous but they can leave scars caused by itching and some people end up with rashes that look like a big red welts. Doctors often misdiagnosis the bites.

How do I stop the itching from bedbug bites?

One that will help out is anti-itching cream for insect bites. You can usually find these at a drug store over-the-counter. Other people say that taking Benadryl or using calamine lotion will help with it. It’s important to remember that even though these methods may help reduce itchiness, they will not get rid of the bedbugs.

How can I tell if I have bedbugs?

We have a comprehensive list of ways in which you can check for bed bugs – generally, the first thing you may notice is a peculiar pungent odor, this odor is often very familiar to building inspectors and tenement dwellers. If you think you may have an infestation, it’s a good idea to check your bed visually.

Other things you may notice are blood spots, fecal stains or cast exoskeleton skins. Take extra care in checking the mattress itself and the corners of bed nets. Bedbugs typically hide in old furniture, behind peeling paint, wooden floorboards as well as seams and folds in a mattress, bed frames, and bed springs.

Remember, just because they are called bedbugs doesn’t mean they are only in your bed. Although in most cases bedbugs are in a small, concentrated area and usually within 10-20 feet of where you sleep.

What do I need to know if I have bedbugs?

If you think you may have bedbugs avoid bringing anything else into the contaminated room. Also remember not to start sleeping in a different bed, the sofa or with another family member or friend because there is a chance that the bedbugs may follow you to the new location and therefore contaminate another area.

Don’t throw anything out, instead, try to get rid of them yourself seek help from a professional. Make sure you don’t bag anything unless it has been washed in hot water and dried on hot for one to two hours. Remember, if you bag up clothing or bedding before washing and they contain bugs, you only contaminate your living space again as they can live up to 18 months without feeding. To be safe just assume everything in that room is infested; also, make sure to review our bedbug treatment section.

How do you get rid of bedbugs?

Visit my page on how to get rid of bed bugs in 4 easy steps killing bedbugs for everything you’ll need to do it yourself without spending a fortune! You want to start treatment as soon as possible because each bedbug can lay four to five eggs a day – if you do the math, that is a lot of bedbugs!
(Consider this: in a room that is around 70 degrees, and there are 40 bugs six months later there would be 5,905 bugs!).

Do bedbugs ever bite private parts?

They sure do – they are happy to feed on any part of the body as long as it’s not hair or an area that is hairy.

Yes, but only if it seals completely! Mattress covers will seal the mattress and keep bedbugs that are in, locked in (and those ‘trapped’ bugs will eventually die) and will also keep bugs out. The bedbugs hiding around the bed frame and other areas will still find their way to the top of the mattress and bite you. Don’t be fooled that this is a cure-all, which it is not; a mattress cover protects the mattress (not you).

I’ve heard that bedbugs rest on the ceiling and fly to their target, is this true?

Not true, BUT, Bat Bugs which are like bedbugs except for the hair on their head, feed on bats. When you remove the bats from your home, these bugs may move down and start feeding on you.

If I have a pet in the room with me, will the bedbugs feed on it instead of me?

No, you are the Filet Mignon, and your pet is ground beef. Humans are the preferred host for feeding!

Is it true that a bite from a bedbug can take up to 14 days to show?

From what the California Department of Public Health Vector-Borne Disease Section says, a bedbug bite may not show for up to 14 days!

Everyone reacts differently to bedbug bites, but if a reaction does occur, it usually happens by late morning.

Can I take legal action against the hotel for being bitten by bedbugs?

Yes, there are some examples, but three of the most popular include a woman who filed a lawsuit against Catskills resort for $27 million; bitten so bad that she can no longer stay in hotels. Because this is a critical part of how she makes her living (she’s in entertainment booking), she can no longer continue her lifestyle.

The second involves a woman staying at the Hilton hotel in Ohio; Sai Kim filed a lawsuit for more than $5 million claiming that she ended up with 150 bedbug bites on her hands, feet, face, fingers, toes, legs, neck, back, chest, stomach, and genitals. 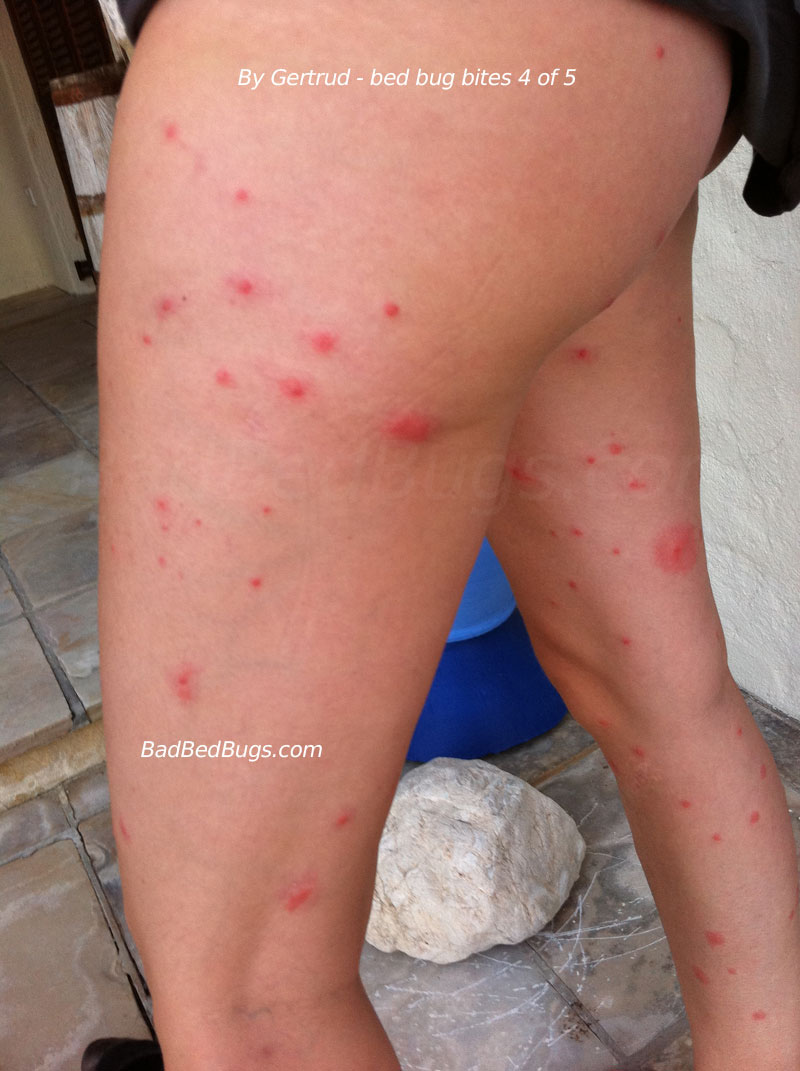 Bed bug bites cover Gertrud’s legs and attacked her in her sleep!

As a direct result of exposure to bedbugs, she was left physically scarred and emotionally damaged and that these consequences were a direct result of the defendant’s negligence and that the hotel breached its duty to provide reasonably safe accommodations that eventually led to “embarrassing injury and tremendous emotional distress.

The last case and probably the biggest bedbug case ever settled out of court was a woman who was bitten more than 400 times while staying at a Ramada Plaza Hotel in San Francisco. Some say that she received $71,000 to settle her bedbug claim. Note: The reports on the internet about the lawsuit came from the City Star, a local paper, but in trying to find the actual case, no information was available.

What is the size of a bedbug?

The picture below shows the size of a bedbug compared to a woman’s fingernail. 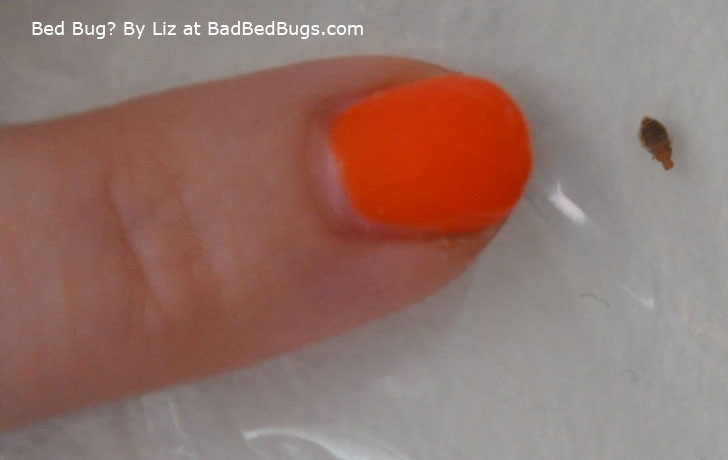 This is a picture of a bed bug compared to a fingernail to give you an idea of size.

We have two pages of questions and answers about bed bugs, see Page 1 and Page 2.