What’s in the Powder? Bed bug powder is simply food grade Diatomaceous Earth and is  ground fossilized algae-like plants called diatoms which is non-toxic. When placed into a duster such as a plastic ketchup container and gently blown into suspected areas, it effectively kills bed bugs (and works on fleas & ants as well).

There are two types of diatomaceous earth (DE), one is food grade (the good stuff) and pool grade which is dangerous to breathe. This is the same stuff farmers use to keep insects out of their grain. There are even claims that you can breath in as much food grade DE as you like and not risk lung damage, but I would NOT chance it. The absorbent quality may also cause significant drying of your hands, so play it safe, wear a face mask and gloves when spraying.

DE is also referred to as bed bug dust, mother earth, or fossil shell flour, it’s the food grade DE that they are talking about.

How Does It Work?

By using a duster to force the power into nesting areas, the bugs come in contact with the powder and are as good as dead!

So does it really work? Yes, without question, but you have to do multiple applications spread out over many weeks!

Not sure where to spray? No worries, we show you exactly where to find them :)

How Much Does it Cost?

Ah, the big question! Can you believe it only runs about $12 for a 2-pound bag and you can buy it from almost any local feed and supply store? This is why pest control companies would rather you not know about it :)

Some exterminators and online stores sell repackaged versions of this, jack the price way up, and claim their product is better than what you can buy yourself. Read the label to learn the truth :)

If you don’t want to run around buying the powder and duster, then consider this  2 pound bag and duster from Amazon.

How Long Before They Die?

Changlu Wang, Timothy Gibb, and Gary W. Bennett from Purdue University did an excellent study on the cost and effectiveness of using Diatomaceous earth on infested apartments containing thousands of bed bugs. Also tested was chlorfenapyr spray but it was not as good as the powder. 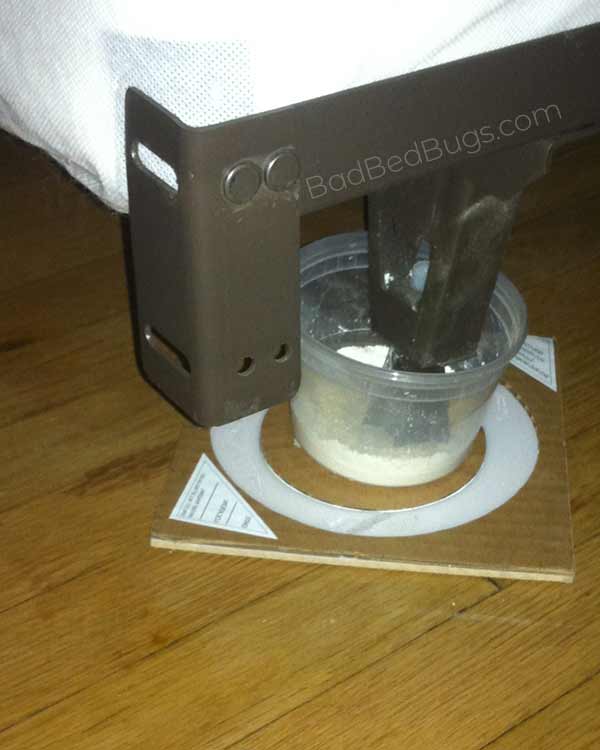 They treated by using a mattress encasement (including the box spring) and with steam. They also made sure to put the legs of chairs, sofas, nightstands, and anything else into bed bug interceptor traps like that shown in the image above.

If you don’t want to make your own, you can buy a 4 pack of climb up protectors from Amazon.

It took ten weeks, and they re-steamed and reapplied the powder when necessary; because death is not immediate, the females may be able to deposit eggs which will hatch and become active. It is these hatchlings (instars) that you need to stay on top of.

The study found that bug interceptors trapped an average of 219 bed bugs per apartment and were a valuable part of the treatment program.

In the study, 16 equally infested units were selected and half the units were 100% bug free while the remaining units were 98% free; another application would likely have taken care of the rest but the study was limited to 10 weeks, so we won’t know for sure. Total extermination costs averaged $470, but this amount can be greatly reduced using generic products, such as:

We have plenty of success stories using these methods, just remember that these pests are not going to die overnight; it can take a few months to treat a large infestation properly, but don’t give up, you will succeed!

Visitors have successfully eliminated bed bugs using this same method, and the truth is, you’ll have to do most of the prep work if you were to hire a professional exterminator.

How to Apply Bed Bug Powder

You are going to make two solutions, and alcohol spray to kill them on contact, and one combining just the water and powder, and one duster of just powder.  The water and powder are for those that cannot tolerate breathing in straight dust; this spray will not be effective when wet but once the water evaporates, it leaves only the dust and will become an effective insecticide.

Dry or wet, play it safe and always wear a mask when spraying.

1. Make the Power and Spray

This do it yourself bed bug spray is non toxic

Bed bugs love to hide and do a great job at it! Victims have gone months without signs only to discover months later that an infestation was right next to them – Know where to look.

What is nice about this type of pest control is that should the bugs retreat to another areas, like the apartment next door, the bugs will eventually die from dehydration after having come in contact with the dust – it only requires a little to kill the bug.

If you would like to buy a spray rather than make your own, check out this odorless non-staining bed bug spray from Amazon.

Make sure you have cleaned everything, see this list of treatment preparation tasks before we start applying the bed bug dust –  but BE CAREFUL to not get the electrical outlets wet or use conductive attachments!

It’s time to have fun! Spray the mixture on any bed bugs you see which should kill them on contact. Use a flashlight and look for signs of bugs, such as eggs, stains (looks like someone dotted the area with a black marker). If you find eggs (they look like tiny rice, use a fine tooth comb or masking tape to collect them. Make sure to place any eggs in a zip-lock bag with a little dust and immediately place them in your outside trash container. Vacuum up the fallout.

You’ll want to spray the bed bug powder into all the cracks and crevices you vacuumed – a light dusting will do fine.

Now use your duster (filled with food grade diatomaceous earth) and dust into the bottom of the mattress box spring – you can choose to make a small hole in the fabric or simply dust through the fabric to prevent damage. I prefer making a small incision and getting it into the box spring rather than having a film of white powder on the outside. MAKE SURE you are wearing a dust mask and gloves!

The most important part of this whole process is repetition – do it all again a few weeks later to make sure the powder stays effective.

Testimonial to the Power of Diatomaceous Earth

A great testimonial to the power of Diatomaceous Earth by T.M

First off I want to say my review is 100% true 100% legit. Hate trying to read articles on the net about something that go out its way to falsify information.

Got bed bugs cause I was staying in a lot of different hotels because of my job. At first my wife kept complaining about bites but I was never getting bitten so I thought maybe it was something else. Well after about a year of infestation I finally started getting bit. Checked bed for sign of bed bugs and to my surprise, I couldn’t find anything. Finally one day i spotted an adult bug running across the bed and that was the last straw!

After a lot of researching it finally came down to the Diatomaceous Earth (DE) solution. I don’t have children or pets and just don’t like chemicals around myself period if not necessary. The infestation we had could be considered moderate. Like some of the other reviews say, it is a slow killer. So if you looking for an instant solution then use another method. 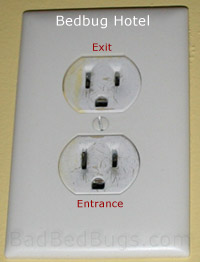 Fortunately for us the bugs were in our bedroom only. So I first stripped down bed washed all sheets, blankets, etc in hot water and dried on hot like recommended. Since we weren’t gone to be in the room I basically layered everything with diatomaceous earth; in-between box springs, under my mattress, entire carpet area of the room including under the bed, my bed railing, headboard front and back, dressers front and back, *some in the wall outlets*, my entire room was covered in a layer of bed bug powder. I slept in our living room for a month but hey, had bugs for over a year so a month of not sleeping in my bed was worth it!

After two weeks from the initial treatment, I vacuumed up everything except for under the bed area. Got a hot wet soapy towel and wiped down all the furniture to clean up the DE and vacuumed the TOP of my mattress. I left the DE on the backside of my headboard on the bottom of my mattress in between my box-springs, the carpet under the bed, and of course inside the box springs. Then I put a red sheet on my bed for the next two weeks. I would come check it and find what looks like small white cotton pieces which are actually the baby bed bugs just curled up and dead. So finally removed that sheet rewashed and am now sleeping in my bed bug free room!

For those who completely remove the DE from infested areas, the eggs that are there hatch over time and you may end up re-infested, that’s why I didn’t remove it all. So the babies that hatched got exposed and died off as well. I will keeping the layers that are left there and will reapply more in a few months just as a preventive measure. There is no reason for me to go in those places so DE can stay there.

If you use the DE please PLEASE wear a dust mask. I’m a hard-head and don’t listen and applied without one. Well the powder floats in the air very lightly and before I knew it, my nose hairs were covered in it! For next two days my lungs were hurting. I got a 4lb bag of DE at Lowes for less than $10. Like I said it’s not an instant solution but it is a great solution. 1 month total to get rid of a medium bed bug infestation – well worth the time!

More Discussions On Homemade Bed Bug Spray
The last comment and 77 other comment(s) need to be approved.
0 replies