A woman that spent the night at a Charlottesville Super 8 Motel claims she was bitten and is suing the owner for 7 Million Dollars! And get this, she’s doing it herself without an attorney!

Of that 7 million, Janie McFarland is asking for 5.5 million for physical, mental, and emotional injuries including emotional distress, and pain and suffering.

She then goes on to ask 1.5 million in punitive damages for blatant disregard for her safety; dismissive behavior toward her attempts to resolve the matter, and delays with insurance.

In her lawsuit, she states the following:

I sustained 45 bedbug bites on my face, scalp, neck, arms, underarms, chest/breasts, back, thighs, ankles, feet, and hands. I had severe swelling in the areas where I was bitten, as well as intense itching and pain. Some of the bites have left scars which are still visible. They also have cause periodic swelling in my left foot (which still still occurs up to the date of this submission) which at times requires me to wear a medical boot.

McFarland goes on to say that:

My left foot swells periodically requiring me to wear a medical boot. When the foot is swollen I have difficultly walking and at times I cannot walk at all. During these periods I cannot attend social or church functions or fulfill certain duties as a church minister.

I cannot walk from parking area to church location or maintain my walking exercise routine. During wet weather, if I am able to walk I cannot do so because I cannot allow my foot to get wet or the boot to become water logged. Did not leave the house for days at a time outside of doctor visits during the first several weeks following the incident because bites severe and unsightly. I have permanent scaring on several parts of my body where I was bitten.

She claims she has lost the ability to travel, participate in social functions, and walk without assistance.

On April 5th, 2016, the judge ruled that she can not go after the 1.5 in punitive damages, but since she claimed she saw at least 50 bed bugs “leaping” and “crawling everywhere.”, the judge concluded that for there to be such a number of bed bugs, the problem was likely ongoing, and therefore the lawsuit over the remaining 5.5 Million can continue.

McFarland submitted pictures and video of the bed bugs. The Super 8 motel submitted inspection reports from Orkin, but the judge said those reports appear to be for the prevention of ants and roaches and that there is no indication that Orkin inspected the rooms for bed bugs at any time prior to McFarland’s stay.

Another Lawsuit? For 12 Million?

According to documents, McFarland stated in interrogatories from Super 8’s attorney that she is also known by other names, one being Janie Marie Farland. There was a lawsuit for $12,175,000 filed by Janie Marie Farland against the United States in 2012.

When she was asked if she had ever been involved in any other occurrence resulting in bodily or other injury, she mentioned a disability claim for a rotary cuff while serving in the armed forces and also a personal injury claim while working for OHL Delivery Service.

Her cases appear to be well documented and is a lesson to all – if you feel you have been harmed in any way, make absolutely sure you document everything, be it doctor visits, pictures of bites, or just communications had with the other party.

HISTORY OF BED BUGS?
Doing a quick Google search for “super 8 390 Greenbrier Drive bed bug” I found three complaints (2 on TripAdvisor and 1 on Yelp) with various dates ranging from 2009 to 2012. If I were Janie, I’d spend a lot of time scouring the net for complaints and contact those reviewers to see if they have any documentation such as emails to management or medical records; I’d also ask for sworn affidavits from each about their experience.

Results of review search in hotel in lawsuit

If I were the hotel owner, I’d start looking through all my records for evidence of previous complaints asap and also do the same online search to analyze the credibility of any complaints. I’d also find a dog that can sniff out bed bugs and have every room checked monthly so that if this happens again, I’ll have records to back me up.

I am by no means implying that the Super 8 has a history of bed bugs, I’m simply pointing out that a quick search brings up complaints. A person may claim they have been bitten by a bed bug but without pictures, who is to say it was not mites or something else? Regardless, it appears that a Jury will make the final determination. 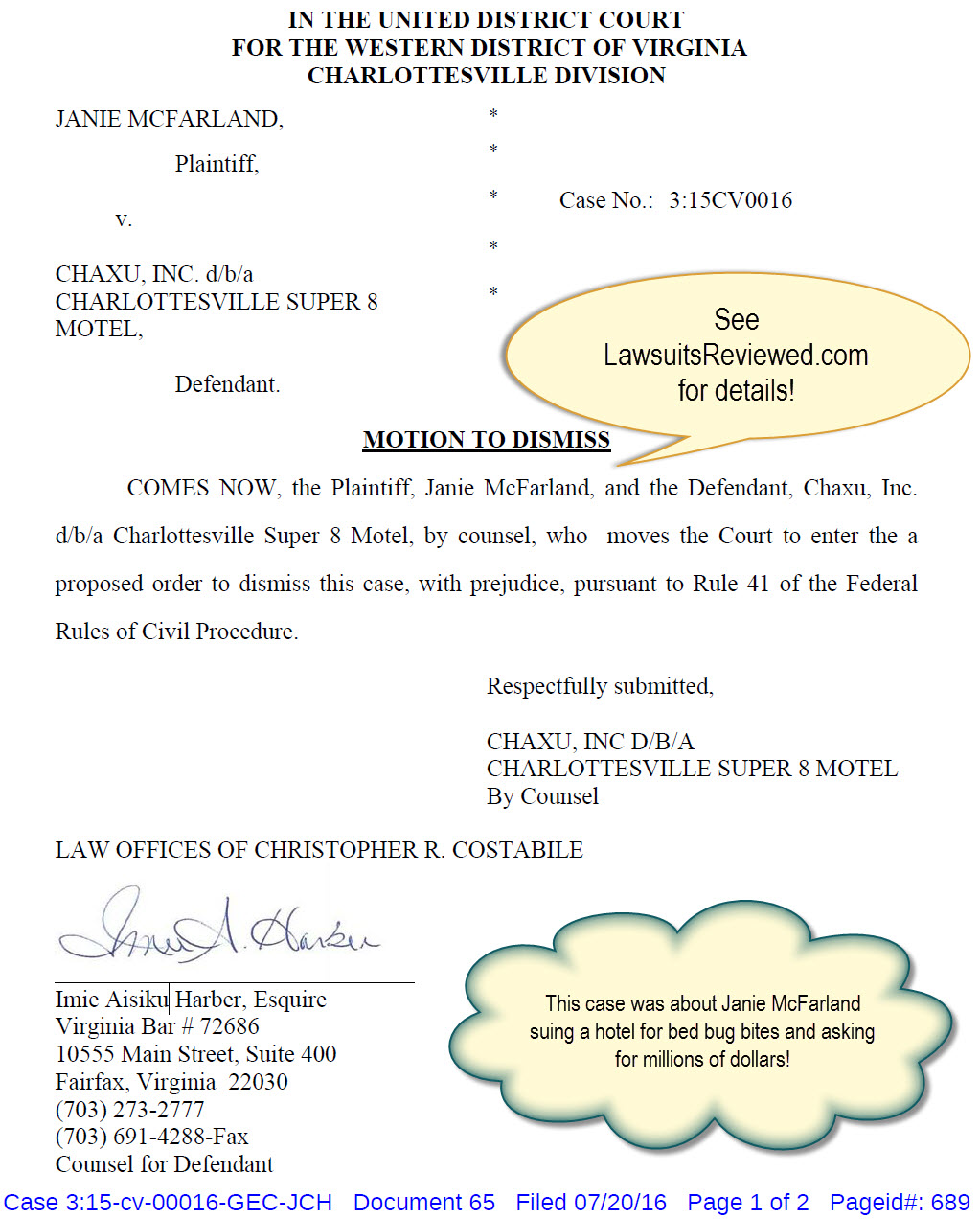 The last comment and 3 other comment(s) need to be approved.
0 replies